A Conversation with Arthur Turfa in The Column 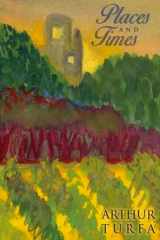 Originally from Pennsylvania, Arthur Turfa has now lived over a decade in the Midlands of South Carolina. In between these two places are many others, stretching from California to Germany. Turfa hold degrees in German, a BA from Penn State, MA from UC-Irvine, Master of Divinity from the Lutheran School of Theology at Chicago, MA in History from Binghamton University, and a doctorate in Literature from Drew University. Since 1981 he has been a Lutheran pastor, and served as a chaplain in the United States Army until his retirement, with the rank of Lieutenant Colonel. Turfa’s first book of poetry, Places and Times, was released in 2015 by eLectio Publishing. His poems have also appeared in Altpoetics, Metaphor, SC English Teacher, the Munyori Literary Journal, and Afflatus.

Read the interview with Arthur Turfa